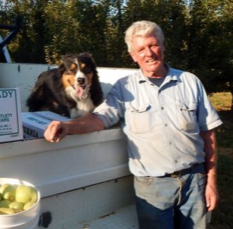 Thomas Melvin Curry passed away on March 8, 2020 quietly at home, after a short but courageous fight against pancreatic cancer. Tom was born on December 19th, 1942 in Oakland, California to Margaret (Hendricks) and William Curry. He was raised in Richmond, California and graduated from Harry Ells High School. Tom proudly served in the U.S. Army as a dog handling specialist and a MP in the 1st Infantry Division from 1964-1966. After serving in the Vietnam War, he worked as a diesel mechanic for Standard Oil. In 1967 Tom moved to Lakeport, California where he followed in the family business of pear farming. His great grandparents were some of the earliest settlers in the Scotts Valley region of Lake County. Tom enjoyed Jeep rides and hiking the hills of the family property with his family and dogs. He was a proud veteran and a member of the Lake County Military Funeral Honors Team. He was also a volunteer firefighter for the Lakeport Fire Department for nearly 30 years. He loved old country music, classic western movies and John Wayne. He leaves behind his wife of 41 years, Sharon, and five children, Cathi Curry, Justin (Kristin) Curry, Tommy Curry, Derrick (Asvi) Arnold and Damon Arnold. He will be lovingly remembered by his granddaughters, Addison, Aubrie,and Ava, as well as many nieces, nephews and extended family. He also leaves behind his beloved dog, Ringo. Tom was well respected and loved by all. Those who knew him describe him as a true gentleman, humble, kind and a gentle soul. As many have said, “they just don’t make ‘em like that anymore”. “When the road looks rough ahead, remember the ‘Man Upstairs’ and the word HOPE. Hang onto both and ‘tough it out’.” – John Wayne Per Tom’s request, no services will be held. However, he also said that once he was gone, we could do whatever we wanted... A celebration of his life will take place in the summer.

Share Your Memory of
Thomas
Upload Your Memory View All Memories
Be the first to upload a memory!