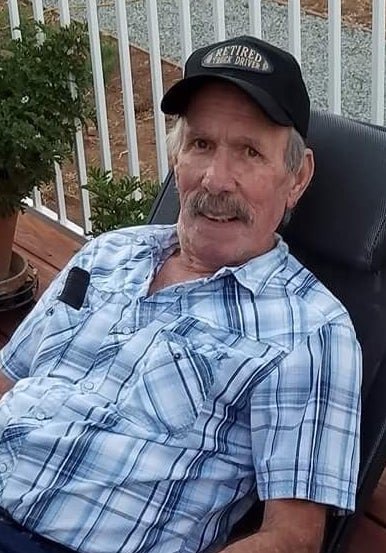 Craig “Gilly" Newfield Graveside Memorial Service will be held on Friday, September 25th at 11:00 am at Our Lady of the Pines outdoor church at Forest Lake at Highway 175 and Forest Lake Drive, Cobb. Gilly will then be taken by riderless horse to Glenbrook Cemetery on Bottle Rock Road for his final rest. Social distancing and masks please. Craig was born to Elna and Richard Newfield on Good Friday in March 1951 in Burbank, CA. His mom always said he came that day just to mess up her Easter plans. He moved to Cobb when his parents purchased Cobb Valley Ranch on Bottle Rock Road. He was 11 when he stayed with his father to save his home from a wildfire. He was heartbroken when the ranch was lost in the Valley Fire. Craig attended Little Red School House (his mugshot still hangs there). He was a Kelseyville High graduate. He participated in 4H and amateur rodeo where he was a bareback bronc rider. He couldn’t make any money at it so he decided to stick to his second career as a truck driver. He worked for Clearlake Truck & Crane, Red Archer Equipment Rental, and Archer Trucking for more than 40 years. He always made sure to go and “worsh” his Peterbuilt on weekends. His favorite part of the day was walking into his garage, popping a Coors, and turning on his TV, as it was “Fiesta Time”. He once had a horse named “little Horse” because, well, he was little. He used to say he was born 100 years too late. We know that wasn’t true as he would have starved to death on the trail because he couldn’t boil water. Craig was a simple man with a huge heart, great sense of humor, and few demands. If you could make his Mother's recipe for mac and cheese from scratch you were a keeper. He passed quietly in his recliner, watching his favorite cartoons (NASCAR or WWF). We are not sure if it was from his displeasure of the outcome, that he would miss his beloved Kansas City Chiefs season, or if it was because he did not want to see the Hospice nurse again. Craig is predeceased by his mother, Elna and his father, Rich (No more red X soda pop for him either). He is survived by his wife. Emily of 25 years; sister, Linda Eastman; brother, John Newfield; daughter, Rosalinda; 2 nephews, and 2 grandchildren. Donations can be made in Craig’s memory to the American Cancer Society for the research of Polycythemia Vera which there is no cure.

Share Your Memory of
Craig
Upload Your Memory View All Memories
Be the first to upload a memory!
Share A Memory