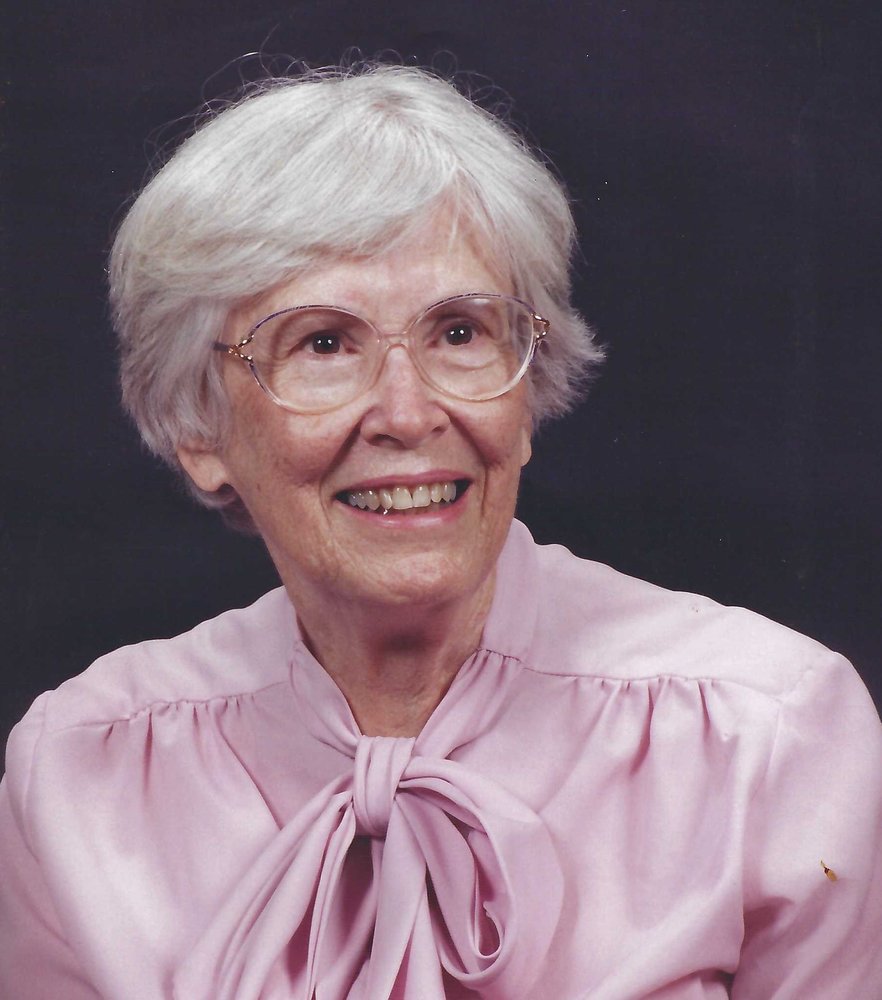 Please share a memory of Gladys to include in a keepsake book for family and friends.
View Tribute Book
Gladys Crowson Crabb Gladys Crowson Crabb, age 98 years, of Lakeport, CA died peacefully on January 29, 2021. Gladys was born on July 27, 1922 in Lexington, VA to Benjamin Franklin Crowson and Gladys Crowson. Her father was an English professor at Virginia Military Institute, and early on instilled in her a love of the English language and the importance of correct grammar. About age 6 years, she moved to Charlotte Hall, Md when her father became Headmaster of the boys school there. She spent idyllic days playing in the country, running through the mess hall at noontime to chat with the cadets, and sneaking her beloved dogs into her bedroom at their home when her mother wasn’t looking. She graduated early from high school, at age 16 years. She attended the University of Western Maryland (later known as McDaniel College) in Westminster, Maryland and after graduation in 1942, that Fall, began her first teaching job. At the end of the second school year, she met a handsome Navy pilot. Six weeks later, she married Robert Talmage Crabb, Jr. of Americus, GA. They were married in Americus at Calvary Episcopal Church on July 16, 1944. After the war and his retirement from the Navy, they returned to Americus to live where they raised a son and a daughter. For many years were both active parishioners in the same church in which they were married. For 50 years, Gladys called Americus home, and did much to advance education in the community. As a devoted member of Calvary Episcopal Church, in her younger years, she loved singing in the choir. On Christmas Eve, she could be counted on to sing “O Holy Night.” Always the teacher, and demonstrating her value that everyone deserved an education, as a member of the Junior Welfare League, as it was called in its earliest years, she organized and taught developmentally disabled children out of the Central Baptist Church. Her helper was her preschool age daughter who would play with them. Those children remained part of the Crabb family for years and at Christmas, she and her family would visit them with Christmas presents. In 1958, she got the call to return to the high-school classroom half-way through the year. With mixed emotion, she accepted, but it didn’t take long for her to fall in love with being back in the public- school classroom and for her students to fall in love with her even though her toughness was well-known. There she remained for 27 years, teaching Seniors about English literature, research papers and how to appreciate Shakespeare. Some of her most important lessons included the disrespect of smacking chewing gum in her classroom, and the dishonor of plagiarism. She enjoyed many accomplishments during her years of service, including 6 times, being named Star Teacher at Americus High School by Star students. During the turbulent years of the desegregation environment in the initial integration of the public schools, she became a bulwark of strength and calm for many students. Perhaps she would say that her biggest accomplishment would be challenging students to believe not just in themselves but in their best selves, the one that she could sometimes see before they could. Also during her teaching years, and saying that she preferred to be the student not the teacher, she earned an M.Ed. in English from Georgia Southwestern College on June 7, 1974. She found time for helping produce many years of The Rotary Jamboree, and for many years enjoyed their couples Friday night bridge club, of which she was often high scorer. Following the death of her son in 2011, Gladys moved to Lakeport, CA to be with her daughter. She made her home with her. Attending Mass made a deep impression on her already devout faith, and she became a member of the Roman Catholic faith. She was preceded in death by her mother and father, brother, loving husband, and beloved son. She is survived by her daughter, Dr. Katherine Andre; and grandchildren Dr. Thomas Andre, Mrs. Sarah Summers, Mr. Brent Crabb and Mr. Rob Crabb, IV (Debbie) ; four great grand-children and numerous nephews and a niece. At her request, she is being buried with her husband at Andersonville National Veterans Cemetery. Services will be not scheduled at this time, due to the Pandemic. Please pay your respects individually by visiting the cemetery at Andersonville, or in her memory, read Shakespeare, or a Psalm. If you want to make a donation in her name, please donate your time or money to your favorite canine organization or animal shelter, or to the The GSW Foundation “Crabb Scholarship,” created by Americus friends, at P.O. Box 926, Americus, GA 31709 to be given annually to a student from Americus-Sumter High. And now, with apologies to W.S., “Now cracks a noble heart. Good night sweet princess, good night: and flights of angles sing thee to thy rest.”

Share Your Memory of
Gladys
Upload Your Memory View All Memories
Be the first to upload a memory!
Share A Memory