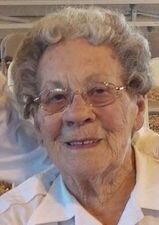 Please share a memory of Audrey to include in a keepsake book for family and friends.
View Tribute Book
Audrey Elizabeth Lindeblad peacefully passed away on February 22, 2022. Audrey was raised in Oakland, California. She was born to Leslie and Elsie Pringle on November 15, 1926. She married Irving Lindeblad on January 27, 1947 and moved to Scotts Valley, Lakeport where she lived until Irving’s death in 1996. Audrey was active in the Scotts Valley Women’s Club, Sons of Norway, Eastern Star (where she was an honorary member for 75 years), and she served on both the Hartley Cemetery Board and the Lake County Election Boards. She especially enjoyed volunteering for the Lake County Sheriff’s Office for fifteen years, working both at the jail and in the office. Audrey worked hard as a rancher’s wife and also worked various jobs during her life, but what brought her the greatest joy, was her family. She is survived by her children; Grant (Julie), Dennis (Sharon) and Carol Ann (Ash) Boesch. Audrey also leaves behind five grandchildren, six, great-grand children and three great-great grandchildren. Per Audrey’s wishes she will be laid to rest next to her husband at Hartley Cemetery. A private family service will be held in early March. In lieu of flowers, a donation to your favorite Lake County volunteer organization in Audrey’s name would be appreciated. A special thanks to Orchard Park Senior Living in Clearlake and Hospice of Lake County. “Life doesn’t come with a manual, it comes with a Mother”

Share Your Memory of
Audrey
Upload Your Memory View All Memories
Be the first to upload a memory!
Share A Memory