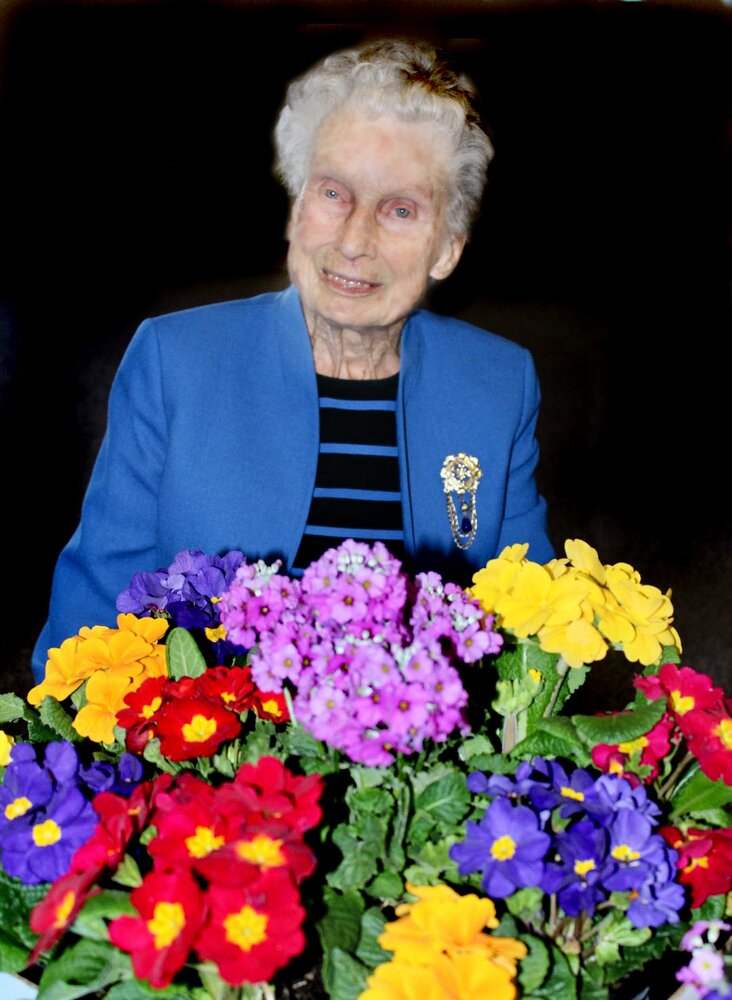 Please share a memory of Katherine to include in a keepsake book for family and friends.
View Tribute Book
Katherine Marie Lewis was born on January 27, 1921 in Canton, China to missionary parents Roy A. Falconer, MD. and Clara Falconer. Clara passed away six weeks after Katherine was born and is buried in Hong Kong. Katherine and her dad stayed in Nanning, China where Dr. Falconer was helping to establish a hospital. They returned to the United States short of the seven-year commitment when Katherine was about a year and a half old. He remarried and Laura Warner Falconer became Katherine’s mom. Several years later, a brother, Marvin Falconer, was born and the family continued living in Los Angeles before moving to Glendale California. In 1943 the Falconer family moved to Lakeport where Dr. Falconer established a medical practice. Katherine graduated from high school in 1938 from Glendale Union Academy, Glendale, CA. A nurse’s degree was obtained in 1943 from Glendale Sanitarium and Hospital, Glendale, CA. She went on to get her BS degree in Nursing in 1945 from Pacific Union College, Angwin, CA. She met and married Erwin W. Lewis, Jr. of Bachelor Valley in September of 1947. They lived briefly in Los Angeles while Erwin finished his medical laboratory technology degree; then moved to Fort Bragg for four years before returning to Lake County in 1953. They built a home in North Lakeport where Katherine lived until she passed away following a brief illness on March 24, 2022 with family by her side. Erwin and Katherine adopted a son, Gerald Lewis and a daughter, Marna Lewis-Sildve. With their family complete they raised their children in Lakeport and they both worked at Lakeside Community Hospital and then Sutter Lakeside Hospital with Katherine retiring in 1989 after 46 years in nursing and Erwin in 2002 with over 50 years in the laboratory. Erwin and Katherine loved to travel the world, first visiting Hawaii, then Australia, New Zealand & the Fiji Islands, Alaska, Europe and Turkey, to name a few. When they went to China, Katherine was able to see her mother’s grave. They also took numerous trips in their motorhome throughout the United States, and camping trips to Yosemite & Baja. They were dedicated and attentive grandparents taking pride in their grandchildren Troy and Lindsey. Katherine enjoyed being Grammy to her two great grandsons Connor & Payton who adored her. Katherine was predeceased by her mother Clara Falconer (1921), her father Dr. Roy A. Falconer (1968), her step-mother Laura Falconer (1974), brother Marvin Falconer (2005), her son Gerald Lewis (2003), her beloved husband Erwin Lewis (2006), her sister-in-law Lucile Lewis 2013 and sister-in-law Doris Falconer 2015. She is survived by her daughter Marna Sildve (Peter), grandson Troy Kurtz, granddaughter Lindsey Kurtz-Toyama (Nicholas), great grandsons Connor & Payton Toyama, brother-in-law and sister-in-law Glenn & Rose Lewis, nephew Gary Lewis (Toni), and their children George, Katherine & daughter Kanani and Charles, Karen Lewis-Boyle (Bill), daughter Tara Lewis-Petersen (Erik) and children Sydney & Lilah Petersen, Linda Lewis-Scott (Tim) and the extended Siri family - Marna’s birth parents and siblings. Katherine was a member of the Lakeport Community Seventh-day Adventist Church since 1953 and had been involved in competitive flower arranging and various service and study groups during her long and productive life here in Lake County.

Share Your Memory of
Katherine
Upload Your Memory View All Memories
Be the first to upload a memory!
Share A Memory