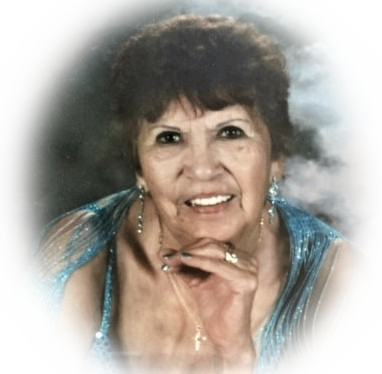 Please share a memory of Lousie to include in a keepsake book for family and friends.
View Tribute Book
Louise Rachel Runne, who loved to be called “Momma” by her kids, went to be with the Lord on September 10, 2022. Louise was born in Durango, Colorado on July 28,1937 to Guadalupe and Manuel Martinez. Lousie had 8 children with Julio Velasquez (D). Vidal Velasquez (D), Priscilla Campbell (Kenny), Antonio Velasquez (Geri), Julia McCardell (Mike), Lizardo Velasquez (Gretchen), Barbara Velasquez (D), Edward Velasquez (Kim) and Hope Velasquez (Mike). And 2 stepchildren Manuel and Louella (Lela) Velasquez. She raised her children with much love, laughter, and a stern hand. She also had 12 grandchildren, Christopher, Michael and David Campbell, Melissa Martinez, Jennifer and Ryan McCardell, Jacob and Emerson Velasquez, Myle, Moses and Roman Velasquez and Kade Velasquez Hilden. She also has 14 great grandchildren Ceejay, Timothy and Avyen Campbell, Leanne, Marissa, and Raquel Campbell, Joseph, Angel and Kane Campbell, Alex and Michael Ponce, Bella and David Beatty, Connor McCardell and 1 great great grandchild, Elijah Campbell. Louise was a longtime resident of Lakeport, moving here in 1987 with her 1st husband Julio and their 3 children. Julio passed away in 1989 and Louise was single for several years. She found love again in 1992 when she met Fritz Runne. They were married 1yr later and are now celebrating 30 years as we speak. When she married Fritz she gained 4 more children, Bobby, Bruce(D), Sandy(D) and Sharon. Which also came with 7 grandchildren and 5 great grandchildren. She loved them like they were her own. She was loved very much by all her family and will be missed greatly. She loved bowling, dancing, and most of all, hitting up the casino. She would often be seen at the casino drinking a Budweiser with her best friends trying to become millionaires and talking about what they would do with the winnings. We all would have been taken care of well, had they ever won. She had a blessed life in Lake County surrounded by a multitude of great and loving friends and could not imagine her life anywhere else. She was a devout catholic and loved to attend St. Mary’s Church. She was surrounded by family the day the Lord called her home. And was once again reunited with her sister Helen, Mother, Father, children Vidal (Bee) and Barbara, her grandson David and 2 beloved husbands Julio and Fritz and a whole slew of other family members and friends. She is survived by her sister Priscilla Samora and a multitude of nieces and nephews. Louise’s Rosary will be held at the Chapel of the Lake Funeral Home in Lakeport at 6:30pm on Friday 9/16/2022. A service will be held on Sat 9/17/2022 at 10:30a at St Mary’s Catholic Church in Lakeport, with a reception to follow at New Hope Church at 305 Peckham Ct in Lakeport. Arrangements by Chapel of the Lakes Mortuary FD1336 (707)263-0357 www.chapelofthelakes.com

Share Your Memory of
Lousie
Upload Your Memory View All Memories
Be the first to upload a memory!
Share A Memory